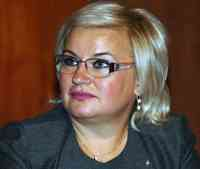 With a diplomatic background, Adriana Ahciarliu has an experience of 15 years in banking & financing marketing and communication. She started her diplomatic activity as foreign affairs councilor to the Minister of Health and coordinated the WB Health Reform Program in 1991 to 1994. After this experience she joined the Ministry of Foreign Affairs where gained 4 years experience in multilateral diplomacy. As a result of her activity she has been appointed director of Communication Department at National Bank of Romania (N.B.R.) in 1996 than senior policy advisor to the Governor of NBR on E.U. monetary policy. Starting 1999 she joined the commercial banking system as PR & Communication director at B.T.R. – Turkish-Romanian Bank.  In 2001 she joined Groupe Societe Generale in Romania as Marketing and Communication Director at BRD Sogelease- Groupe Societe Generale till June 2004 when she was appointed as Secretary General of  “Financial Companies Association – ALB Romania”. In June 2009 she was appointed as chairwoman for CEE Cluster of European Federation of Leasing Associations – “Leaseurope” and member of the Board of Directors of Eurofinas ( consumer credit European Association).

As entrepreneur she is the founder and one of the owners of Diplomat Consult Ltd since 2004.